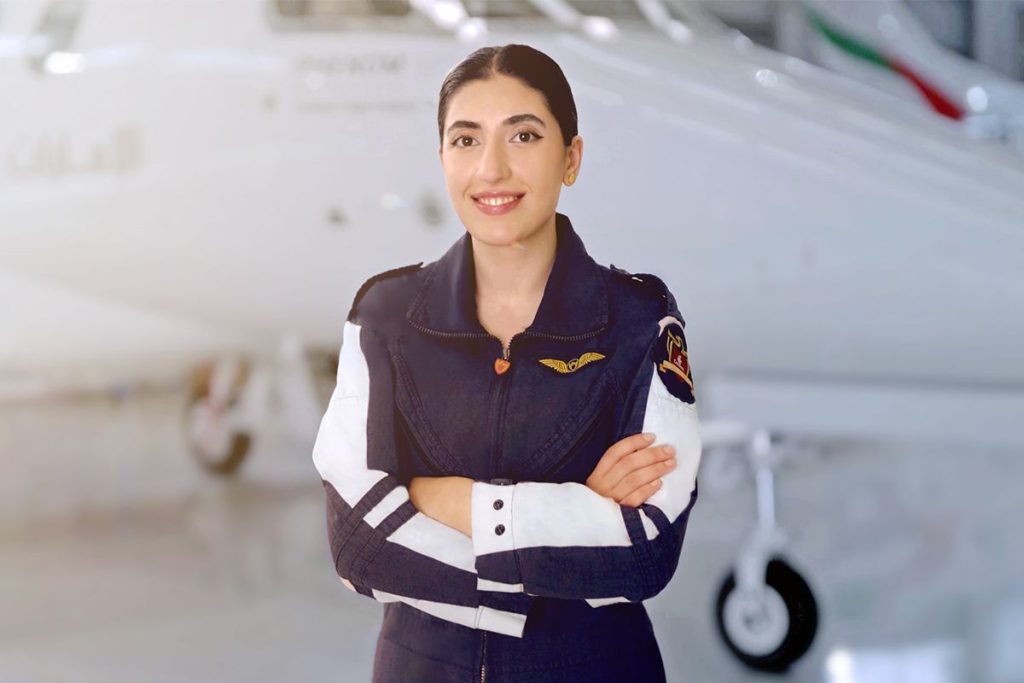 Bayan Al Turabi is the first international cadet pilot to graduate from Emirates Flight Training Academy – the Emirates Pilot Training Academy. Her story highlights the importance of female role models and celebrates the success of women in aviation.

Bayan’s inspiring journey as a Cadet at Emirates Flight Training Academy is a story of determination and success, a model for making dreams come true. The film shows the career path of Bayan, in which her sister (also a certified pilot) played a special role. It was thanks to her that she gained confidence and began her career in aviation. Growing up in Bahrain, Bayan lived in a house situated between the airport and the sea, and that’s when her love for travel and aviation awoke. Bayan’s family has always supported her and her siblings and encouraged them to do whatever they wanted, telling them nothing was impossible.

When asked why she chose to become a pilot, Bayan shared her remarkable story:

From an early age, I had a great need to explore the world. As I never met a female pilot growing up, I did not consider my career in aviation either. It was like that until the first time I saw my sister at the controls of an airplane as a pilot and heard her voice in the passenger announcement. It gave me great motivation to act and I decided to combine my passion for travel with flying. I saw my sister win more decorations and it inspired me to follow in her footsteps. I hope that by sharing my story I will be able to encourage more young women to reflect on a career as a pilot, or at least let them know that they can reach for their own dreams and the blue sky, if only they focus their hearts and minds on it.

Bayan told about training at Emirates Flight Training Academy and what made it special:

The training program at EFTA is different because training there is not only on single-engine piston airplanes but also on jets, which is simply not offered by most academies. In addition to 6 fully mobile simulators that provide a real experience of flying a real plane, EFTA instructors also provide us with great support during the training, shaping our skills and preparing us for the positions of future captains. EFTA is also a place where I have made many friendships that will surely stay with me for life.

Captain Abdulla Al Hammadi, Vice President of Emirates Flight Training Academy, on the success of Bayan and the academy in the world of pilot training:

EFTA’s goal is to enable young people to become a pilot. Our academy offers a world-leading training program for commercial pilots that is led by experienced instructors from around the world. It is not only about our advanced training methods and technologies, but also about our integration learning environment, which is characterized by openness to all qualified candidates. EFTA is proud that our first foreign graduate is a very competent young aviator. Bayan is intelligent, ambitious and conscientious. I believe he has a bright future ahead of him and a great potential to contribute to the local and global aviation industry. Today the world faces a pilot shortage and at EFTA our goal is to build a global aviation industry by educating future generations of talented and ambitious pilots, in the UAE and around the world.

Located in South Dubai, Flight Training Academy was launched by Emirates in 2017 to enable UAE citizens and international students to acquire the necessary qualifications to become a pilot. The Academy combines pioneering educational technologies and a modern fleet of 27 aircraft (one -engine Cirrus SR22 G6 piston aircraft and a very light Embraer Phenom 100EV jet aircraft) and trains cadets who have no experience in flying.

Cadets learn theories and practice on single- and multi-engine flight simulators, which in the future will facilitate their entry into the aviation industry. The Flight Training Academy is an example of the commitment of Emirates, the world leader in aviation, to training and mentoring pilots, thus responding to the market’s future demand for aviation talent.